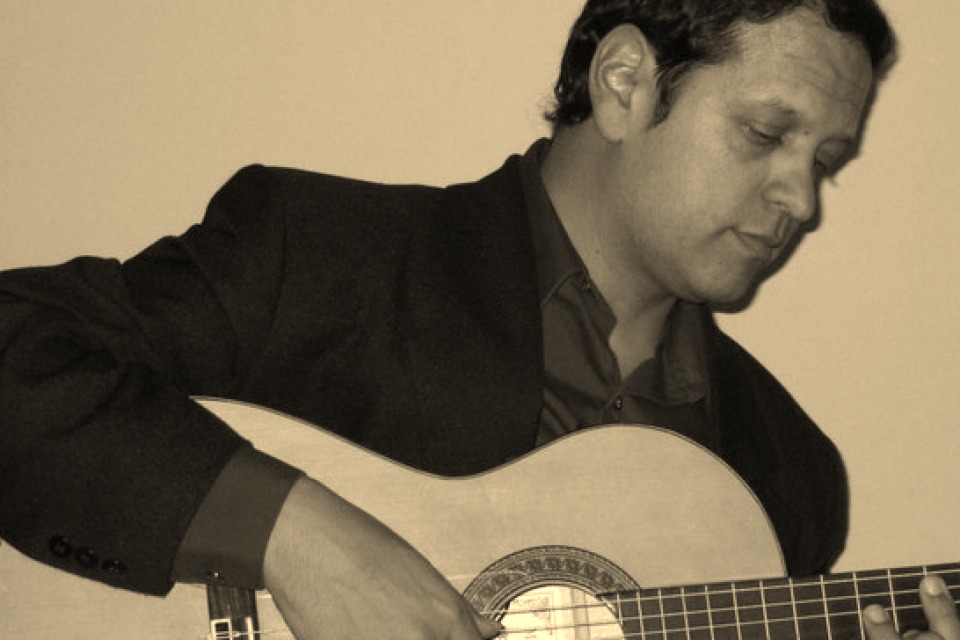 Thank you for visiting the official site of Mark Gutierrez.  Here you will find photos, reviews, updates, my cds for sale ("Spanish Nights" , "I'll Just Groove", and "That's So Cool"), and news about what's going on in my musical world. 9/28/13:  I just received my royalty check from BMI for the 1st quarter of this year and it was a very nice amount!  My songs were used in 22 episodes of "The Young and the Restless" from January thru March.

8/7/13:  Just recently took the plunge headfirst into ProTools, so I've been very busy doing a lot of recording and having a lot of fun doing so.  I've also been very busy at LAMA this quarter as well as doing a lot of gigs around town.  I just posted some videos from a recent gig with my jazz trio.  Check them out on my video page.

1/25/13:  Hello everyone Happy 2013!  Just writing to let you know that the new music supervisors for "The Young and the Restless" have become big fans of my music.  "Her Kiss", "Remember When", and "Memories of You" (all from my "That's So Cool" cd) have been used several times on the show this week and last.  Talk to you soon.

9/11/12:  Received the news today that my song "Feeling Alright", from my "I'll Just Groove" cd, is being featured in the new Kirsten Dunst film "Bachelorette".

7/7/12:  As expected, I had a fabulous time playing with Salsa singer Jerry Rivera last  night at the Conga Room.  The band smoked and he sounded great!  Hope to do it again soon.

6/29/12:  Next Friday I will have the pleasure of playing with reknowned Salsa singer Jerry Rivera at the Conga Room in Los Angeles, looking forward to it!

1/15:  Played a job last night with the band from the Conan O'Brien show (I was subbing for guitarist Jimmy Vivino).  What a smoking band!   I had a great time, hope to do it again soon.  The annual NAMM show is coming up this week in Anaheim, Ca.  I always look forward going to the show as I get to hang out with the good folks at Heritage guitar and Seymour Duncan and check out  new gear.

9/26:  I had a fun time the other night playing with singer Johnny Crawford's Orchestra ( of tv's "The Rifleman" fame).  His band specializes in the music from the 20's and 30's.  I was also happy to learn that my song "Mi Alegria" , from my "Spanish Nights" cd, was recently used on ABC's "All My Children".

9/1:  Hello everyone.  Haven't checked in for quite awhile.  I've been busy doing a lot of solo gigs and working at the Los Angeles Music Academy.  I just recently received a beautiful brand new guitar (h-137) which the good folks at Heritage guitars graciously gave me (see picture below).  It's a real blues/rock machine and will be getting a lot of playing time.  Talk to you soon.

12/17:  Not much to report right now.  I've been busy this month playing mostly private events.  The new cd is just about finished.  Hopefully early next year it will be released.  Happy Holidays to all and thanks for checking in.

9/15:  I just posted 2 videos on my video page from a duo gig last summer with Jose Marino.  A little noisy but you get the idea.

8/27:  This past weekend I had the oppurtunity to play with some amazing musicians at a fund raiser for drummer Steve Gutierrez.    Among the musicians I played with were John Peña, Justo Almario, Bennie Maupin, and Bobby Rodriguez.

I just posted some new videos of my latin guitar trio from a recent concert.  Check them out on my video page.

7/30:  I had the pleasure of working tonight with the great saxophonist/flautist Justo Almario, bassist Oskar Cartaya, and percussionist Richie Garcia.  Lots of fun and incredible musicianship!

7/29:  I had a great time playing in Pittsburgh with Johnny Blas.  Hopefully we'll do it again soon.  Check out the new videos on my video page from the concert I did with Peggie Perkins on 7/19 at the Zoo.  We had a great time.  Also go to www.luisvillegas.com to listen to a short interview he did with me on his new toy (iphone).

7/5:  I'm happy to be back at the Los Angeles Music Academy this quarter playing guitar for Aaron Serfaty's Afro-Cuban drum class and also some Jazz classes.

On July 17th it's off to Pittsburgh, Penn. to play piano with Johnny Blas' latin jazz band at a Jazz festival.  I recorded 4 cds with Johnny back in the 90's and haven't worked with him for years.  I look forward to doing it again.

On July 19th I have the pleasure of working for the first time with singer Peggie Perkins and the amazing Llew Matthews on piano at the Santa Ana Zoo summer concert series.

Lastly, the new cd is coming along slowly but surely.